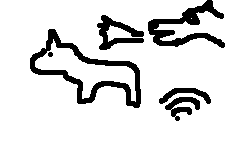 So… unicorns, dragons and the ‘digital divide.’ Which of these three exist today, existed at one time or perhaps never existed at all? It could be that the thought of dragons were inspired by snakes, crocodiles or dinosaur fossils. It’s on the Internet, so it must be true. Unicorns might have been based on an oryx or even an rhinoceros. I mean… it’s not impossible to believe that a horse from thousands of years ago might have had some kind of horn to defend itself… right?

I’d better stick with the ‘digital divide’ conversation. IS there a digital divide? Was there EVER a digital divide? It really depends on how someone chooses to define this ‘divide.’ It’s usually thought of as a division between those who have access to (Internet/broadband/computers/insert here) and those who do not.

Is it the lack of Internet access? According to the White House, about 98% of Americans have access to at least basic broadband services. As the linked article and others (like this one from the New York Times) indicate, ‘access’ and ‘availability’ can be relative terms when price is factored into the equation. I’ve chronicled my own challenges with this over the years. The lack of cable or DSL-based access limits me to a cellular or satellite-based connection. I’ve spent more than one blog post discussing this but, in reality, I have “access” to broadband if I want to pay for it.

What if I don’t want to pay or if I just can’t afford it? According to this survey, 100% of public libraries (that took the survey) offer free public Internet access. There may still be a few counties in Kentucky without a library, but not many (if any). Just last weekend, I visited our local library and looked something up on one of the public computers. I sat at a machine, scanned my library card and opened a browser. I may save this for another entry, but there’s a ‘french fries & WiFi’ blog post to be made as well as it pertains to free WiFi access. It is very difficult to argue that you have no way to access the Internet due to lack of access.

In addition, particularly as it pertains to our teens, most are already carrying the Internet in their pocket already. This survey from a year ago indicated that 70% of the 13-17-year-old crowd had a smartphone. I need to find data on how they’re paying for it, but they HAVE it. For those that don’t have a smartphone, see above regarding home-based Internet access or free community options available.

There may indeed still be a digital divide in our schools and communities, but it probably doesn’t center around a lack of access at this point. Maybe I’ll continue at a later point, but the thought moving forward is “if we’re solved the basic access issues, now what?”